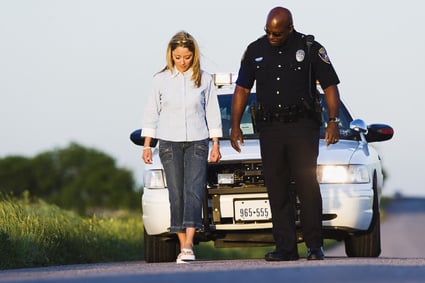 If you are stopped by the police, politely refuse the officer's request to perform "some tests" on the side of the road. These "tests" are the National Highway Traffic Safety Administration (NHTSA) Standardized Field Sobriety Tests.

You nly need to know four words about the three tests:​

JUST DON'T DO THEM

You will learn why refusing to take these tests is so important as you read on.

The Standardized Field Sobriety Tests are:

Many people believe that the results of Standard Field Sobriety Tests (SFST's) indicate whether or not a person is capable of operating a motor vehicle safely. Such a belief is flatly wrong. The tests developed for the National Highway Safety and Traffic Administration (NHTSA) to test motorists for Driving Under the Influence are far from the accurate and reliable indicators of a person's level of sobriety that law enforcement officials would have you believe.

The test used today by law enforcement were originally evaluated and developed based upon a 1977 study. This study tested individuals with Blood Alcohol Contents (BAC's) ranging from zero to .15. Even with such a great disparity between the subjects, after putting the subjects through the SFST's the researchers found a 47 percent error rate. That is, almost half of the subjects were misidentified by Police Officers as being intoxicated when they were not.

In 1981 a further study was conducted. In this study, the BAC distribution of individuals was revised so as to reflect more subjects with BAC's lower than .05 and more with BAC's closer to .15. Not surprisingly the false arrest percentage went down to 32 percent. This is still a very high percentage.

Moreover, the designers of the tests have conceded that one's inability to perform the Walk and Turn "Test", One Leg Stand "Test" or Horizontal Gaze Nystagmus "Test" have nothing to do with a person's ability to drive. In fact, one of the researchers who developed the SFST's conceded that it is not possible to measure a person's driving ability based upon SFST's performance.

Most importantly, SFST's are divided attention tests, and anything that effects a person's ability to concentrate will ultimately effect a person's ability to perform the tests. One can hardly imagine a more disconcerting experience than being on the side of the road in the morning attempting to perform SFST's with a Police Officer hovering over you, flashing police lights in your face, and cars passing by you as you attempt to perform tasks that on your best day, under virtually no pressure, you could not perform to the Police Officer's satisfaction.

Another problem with SFST's is that they require a subject to perform tasks that are not normal. For example, how many of us on a daily basis have the occasion to walk a straight-line heel to toe, while counting out loud, and with our arms at our side, or holding one foot six inches off the ground, arms at our side, while counting to 30 by one thousands. By asking a suspect to perform these tasks which are not normal, and then judging him on how well he performs these tasks, even though they have never seen him perform these tasks before, the Police in essence are virtually guaranteeing a built in failure. A more troubling fact is that in essence the Police are making determinations and grading a suspect as to how he or she would perform normally on these tests when in reality they do not know.

Complete the FREE DUI Case Evaluation Form and Scott will contact you to discuss your case. While some law firms substitute attorneys (imagine walking into court to see someone that you have never met there to represent you!) when you hire Scott Athen to represent you in court, you get Scott Athen!